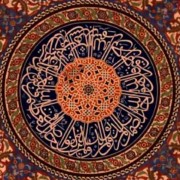 “Tradition has nothing to do with any “ages”,
whether “dark”, “primaeval”, or otherwise. Tradition represents
doctrines about first principles, which do not change.”
Ananda K. Coomaraswamy, Correspondence, 1946

“…there is nothing and can be nothing truly traditional that does not contain
some element of a super-human order. This indeed is the essential point,
containing as it were the very definition of tradition and all that appertains to it.”
René Guénon, The Reign of Quantity

The terms “traditional” and “modern” suggest a distinction between the old and the new, the fixed and the changing, the hallowed way of the past and the progressive way of the future. The underlying polarity that it reflects is rooted in the metaphysical structure of reality, in the architecture of the Absolute inviolability of Substance and the Infinite possibility of Form. This underlying polarity is expressed in the dialectic of Necessity and Freedom. Necessity is the organizing principle of deployment, of projection and reintegration: all that exists emerges from and abides within the common ground of all reality, whose transcendental Substance is simultaneously both its Origin and its End, the criterion of all objectivity. Freedom is the creative principle of this deployment, expressing itself in an infinite variety of modes and modalities of Form and in the immanent potential of our own supra-personal subjectivity.

The terms “Tradition” and “Modernity”, as used by traditionalists like Seyyed Hossein Nasr, are not derivatives of the conventional differentiation between the terms “traditional” and “modern”, though the traditionalists’ particular usage of those terms is premised on the metaphysical structure described above. This can be confusing.

For Nasr, “Modernity” is “that which is cut off from the Transcendent, from the immutable principles which in reality govern all things and which are made known to man through revelation in its most universal sense”, while “Tradition”, by contrast, designates those immutable principles, the sophia perennis or primordial wisdom, which are rooted in the Transcendent. According to this definition, Modernity is not necessarily synonymous with the contemporary (or focused on the future), nor Tradition necessarily with the continuation of history (or focused on the past). Tradition, in this sense, is meta-historical: its only relation to the past resides in the linkage of a particular religious tradition to its original source, which is to say, the revelation that authenticates it, the foundational scripture and its expressive forms of worship transmitted through the protective medium of the particular tradition. But this relation between a particular tradition and its historical origins is in a sense merely incidental. The relation between Tradition as such and Revelation as such transcends history. Revelation “in its most universal sense” is not a historical event: it is based in the eternal present and is continuous. Its authentication is not reduced to one’s ability to retrace it to any particular point in history, rather its authenticity is guaranteed by its ability to resonate as true within the sanctum of the Heart, whose discerning faculty is the supra-rational Intellect. Knowledge is thus a resonance of the spiritual Substance that pervades the whole of creation, and whose presence reverberates within the undefiled Heart. Knowledge is not merely a form of intellectual taxidermy, rather a way of inhabiting the creature itself. It is to be fully human.

In common parlance, the terms “traditional” and “modern” suggest two differing attitudes towards the negotiation of change, the former resisting it, the latter embracing it. But “Tradition”, in the sense of primordial wisdom, is not necessarily resistant to change. The image of Shiva Nataraja embodies the ideas of both stillness (the fixed, or being) and movement (the changing, or becoming). “Tradition” is a combination of both these elements. It is at once static Equilibrium and dynamic Attraction, the classical realism of transcendence and the romantic idealism of immanence. Man is both a slave of change (being subject to the processes of time) and its master (being equipped to transcend it, spiritually). The quest for salvation is, at one level, a quest for peace, the freedom from change, but at another, it is a quest for creativity and freshness, the freedom from petrification. The term “traditional” can have a pejorative implication of excessive rigidity and formalism, while the term “modern” can mean that which is unprincipled or excessively individualistic. In these senses, both the traditional and the modern are opposed to “Tradition”, which recognizes the mutual interdependence of the organizing and creative principles of reality. When creativity ceases to conform to the hierarchies inherent in a spiritually ordered universe, volition becomes satanic and profanes Freedom. And when the demands of conformity stifle genuine spiritual expression, the intellect becomes tyrannical and profanes Necessity. “Tradition” recognizes that Necessity (the intellectual discernment that creative expression has a necessary organizing principle) and Freedom (the transcendence of creative expression in conformity to that organizing principle) are tethered together, and that intellectual discernment has moral implications. The human ethos is thus a dimension of the sacred structure of reality.

“Modernity”, in the sense understood by traditionalists, indicates a tendency to moral “hardness” and intellectual “opacity”. When reality is no longer perceived as metaphysically “transparent to transcendence”, there is no spiritual reality perceived that can resonate within the human soul, nothing to “melt” the heart into compassionate submission, the true and serene Freedom, whose tawdry counterfeit is a soul enslaved by passion, yielding to the momentary gratification of self-indulgence before its unsated appetites are drawn away by the next seduction.

It is in this sense that “Tradition” and “Modernity” are placed in opposition. The traditionalist is not necessarily opposed to the “modern” as conventionally understood, only to “Modernity” as the converse of “Tradition” in the particular sense defined above. A traditionalist may be “modern” in the use of dress, language, modern amenities or technologies, and yet will necessarily be opposed to “Modernity” in the sense of its denial of transcendence or sense of the sacred. Correspondingly, not all that appears “traditional” accords with “Tradition”. So, for instance, fundamentalism, though it may don traditional garb and use traditional language, is the very antithesis of “Tradition”, which eschews fundamentalism’s reduction of the spirit to the letter, its excessive formalism and exclusivism. “By their fruits shall ye know them”, not by their appearances.

Words and labels, in the end, often conceal reality by abstracting it. At their best, they act as symbols, arousing meaning that lies dormant within us. “Tradition” and “Modernity” are ultimately aspects of our selves: “Duo sunt in homine”, taught St. Aquinas, a teaching that resounds throughout traditionalist discourse and within each human soul. There is in the end an element in each soul that must be overcome for the greater good. “Tradition” invites each of us to fulfil our full human potential, to perceive the outer world with the inner eye, with compassion, and to conform the will to the intellect, thereby overcoming the usurping tendencies of the Promethean self, integrating Truth, Goodness and Beauty in our lives in order to achieve Everlasting Life.

Towards a Traditional Understanding of Sexuality by M. Ali Lakhani
Scroll to top

This site uses cookies. By continuing to browse the site, you are agreeing to our use of cookies.

We may request cookies to be set on your device. We use cookies to let us know when you visit our websites, how you interact with us, to enrich your user experience, and to customize your relationship with our website.

Click on the different category headings to find out more. You can also change some of your preferences. Note that blocking some types of cookies may impact your experience on our websites and the services we are able to offer.

These cookies are strictly necessary to provide you with services available through our website and to use some of its features.

Because these cookies are strictly necessary to deliver the website, refusing them will have impact how our site functions. You always can block or delete cookies by changing your browser settings and force blocking all cookies on this website. But this will always prompt you to accept/refuse cookies when revisiting our site.

We fully respect if you want to refuse cookies but to avoid asking you again and again kindly allow us to store a cookie for that. You are free to opt out any time or opt in for other cookies to get a better experience. If you refuse cookies we will remove all set cookies in our domain.

We provide you with a list of stored cookies on your computer in our domain so you can check what we stored. Due to security reasons we are not able to show or modify cookies from other domains. You can check these in your browser security settings.

We also use different external services like Google Webfonts, Google Maps, and external Video providers. Since these providers may collect personal data like your IP address we allow you to block them here. Please be aware that this might heavily reduce the functionality and appearance of our site. Changes will take effect once you reload the page.